“At the end of 2013, ATP bid farewell to their signature UK holiday-camp events. Through following the continued reaction of long-standing fans to this news, and seeing their feelings even further confirmed in a recent ATP Survey which was completed by thousands – it is with excitement that a return to UK holiday camps this November can now be announced. The perfect location has been found too – Prestatyn Pontins in North Wales. The site benefits from being far more respectful, location-wise, to a nationwide customer base, while still being within easy reach of international airports for non-UK attendees.

The new site benefits from a venue complex with two large-capacity stages, both boasting multiple-tiered seated areas to assist with visibility, as well as a huge selection of on-site activities available open to all attendees. These include an indoor swimming pool, football pitch, basketball & tennis courts, crazy golf course, go-kart track, air hockey, and a large arcade games area. More events and activities will be announced over the coming months, along with details of family accommodation deals, to be set in separate, quieter locations. Of course, the beautiful sandy beachfront is also only a few hundred metres walk away too”.

Curation this year comes from the acclaimed, Turner Prize nominated, visual artists The Chapman Brothers, who return to ATP ten years on from their first stint. Jake Chapman said; “We are so honoured to have been asked to curate ATP again this November in Prestatyn. Ten years ago we curated the first Nightmare Before Xmas and lost so many brain cells that it’s taken a decade to replace them. It is extremely special for us be involved again.”

JAKE AND DINOS, their version of the ATP nightmare?

TRACEY’S BED BACK AT THE TATE….

One of contemporary art’s most famous and controversial works will return to the same London gallery where it first gained notoriety. The installation, which Emin has described as a self-portrait, drew huge crowds when it went on display at Tate Britain for the 1999 Turner Prize show and was bought by Charles Saatchi in 2000. 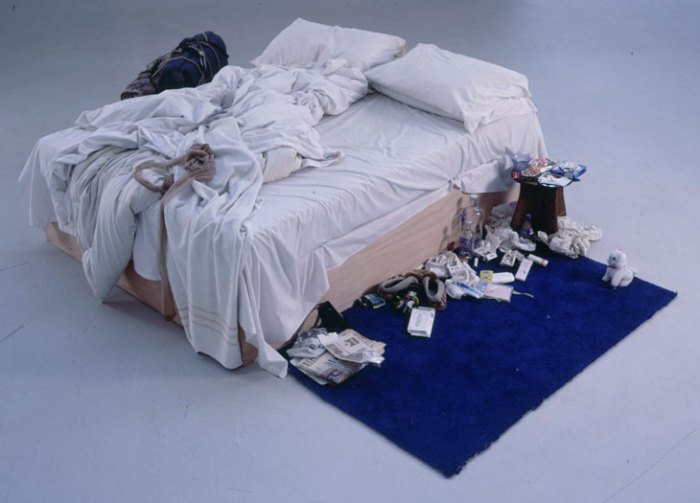