The next station is Hoxton…. primitive cave system….rivers…cockiness…. deep breath…. what is left.   Cockroach in a landscape, creeping about….  rather good interview by John Rodgers with the ever stimulating Iain Sinclair here…   it is completely upside down, just waiting on the next major developer… Meanwhile in the rubble of the developers, things are Not In Use

Published on Jul 24, 2015 – Author Iain Sinclair talking about his recent books London Overground and Black Apples of Gower. Interview by John Rogers July 2015.
.
NOT IN USE looks like it will be one of the underground art whatevers to explore this coming week.  Skeleton Cardboard is an artist fast evolving now, his little quips, his dry humour, his thin-line boldness and his colourful black and white affrontery. He’s a little more that a scratchy skeleton on a piece of cardboard left on a windowsill outside a gallery these days. An artist more than holding his own out there on the streets of East London, Skeleton Cardboard has a show opening this week at “a secret location on Redchurch St, Shoreditch, East London”. Not In Use opens on the evening of Friday July 31st (6pm until 10pm) and goes on through the day on August 1st.(11am until 5pm). Last seen at that Warehouse show Play over by London Fields, (and on just about every second street around East London or so it seems right now), Not In Use promises more of Skeleton Cardboard’s rapidly developing fingerprint, we rather like his developments, something clearly in use here…. … 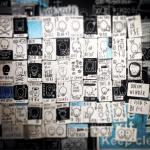 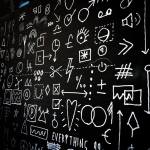 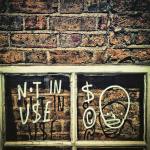 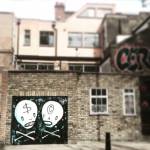 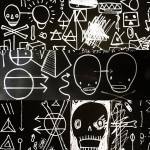 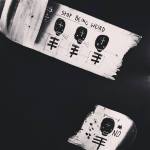 “Nearly finished the x81 mini arts for the Shmallery vending machine at my ‘Not in U$e’ show in Shoreditch this Friday!! For just a pound you get a mini hand drawn piece & a lotto card to win something larger!! Good luck!!” said the artist

4 thoughts on “Organ: This week’s secretive underground art thing (that’s not in use), and author Iain Sinclair on East London’s primitive cave system…”