Both Marnie and Amy has appeared and performed at a number of Cultivate events now. We never ask performance artist Amy Kingsmill what she’s actually going to do, we trust her, we respect her art, she tells us what we need to know and tells us what she might need, besides that, the space is hers. We kind of thought we vaguely knew what to expect this time but Amy’s art is evolving again, Bloom was astounding, it was disturbing, it was intensely beautiful…

“Wonderful review of Bloom performed at Cultivate Debased at BSMT Space ‘Never has a packed art gallery been so quiet, so transfixed and fully focused … Not a word said in the basement, complete silence for Amy’s half-hour performance save for the noise drifting down from the street… A gallery almost stunned, silence as Amy Kingsmill’s white dress turned red and her performance twisted people’s expressions’ – Some words from the review of the whole show that featured performance and wall-based art from a selected group of painters, performers and more that appeared on the Organ pages, words that were then picked up on my Amy who re-posted them on social media and posted by her along with this rather powerful post-performance photo 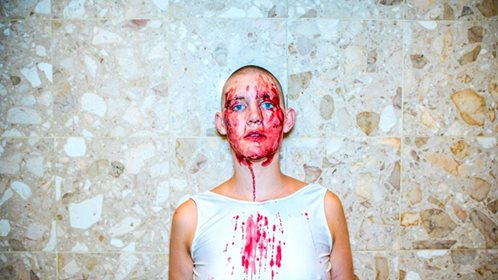 “Salvation in suffering. There is a beauty, a divinity I find in sacrifice, in enduring an ordeal. With each step of this action I tranform, through embracing beauty with pain I become beautiful then in turns grotesque. I feel so beautiful when I bleed, when I suffer. N/B This is not about torturing myself this is about embracing the full spectrum of feeling and the specific head spaces which can only be entered through extreme endurance”.(Amy Kingsmill) 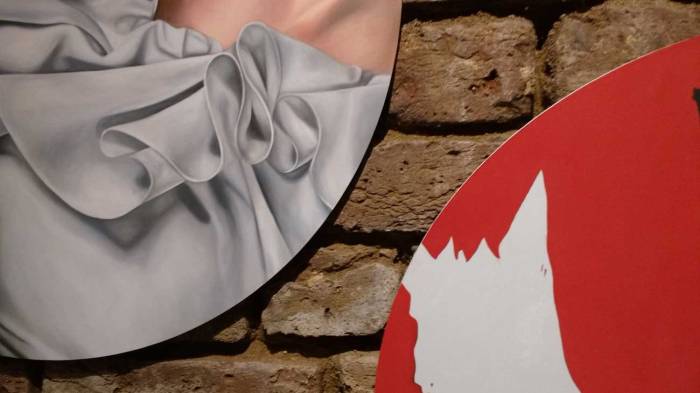 The two performances at the opening night of Debased somehow worked so strangely well together side by side. Marnie Scarlet’s first interactive performance art piece ‘Face Dress’ featured her ‘Dress that is made of Me’ – a dress full of used make-up face wipes, full and flowing and trailing out behind her. She entered the space with a clean white make-up’ed face, and began to paint on bright blue eyebrows, rosey red cheeks and a paint roller of bright pink rolled over her lips ‘Don’t I look beautiful?’ she asked. Oh yes. No mirror needed here as the audience answered her question as we enjoyed the bright paints covering her face. We were then invited to pin on more of her used face wipes onto her dress, fill out her dress with used wiped off make-up, making her even more beautiful. The performance ended as she took off her freshly applied painted make-up with a wipe which was then also added and pinned to her dress and off she went with a flourish. We cheered, we clapped, we laughed (with her and at ourselves) and all our made-up faces cracked with delight… Fantastic.

Then shortly after along came Amy Kingsmill and her new performance piece ‘Bloom’. From the off Amy created an atmosphere, a space and a feeling that made us look, and stare and keep with her and stat totally focused on what was happening. The slow intensity of her picking out roses and laying them at her feet, each one carefully considered, smelt, understood and laid on the floor, the roses creating a circle around her, a cage like space slowly growing around her that we could only look in to from outside. We kept with her, what would happen next? What was this all about?

and then we found out…as she plucked a fresh petal from the last white rose and using a needle pinned it to her face. Deathly silence overcame us, no-one dared move or say a word, we were all transfixed. As her face become slowly covered in pinned white petals, blood starting to creep down her face creating bright, flowing marks down her satin cream dress, she continued on. Each petal considered, each placed and pinned so carefully on her face, each one felt, each one adding more, and more, and more. The slow controlled movements became harder to accept, the blood flowing from a few, as her face became covered in petals. Beauty is in the eye of the beholder. Until her face was full of pinned petals, white and red, complete. And just as carefully and considered, one by one, each petal and pin taken out, laid down, dropped onto the floor. The fresh white petals stained with red blood laid on the floor, used. Every petal and pin taken out created a new flow of blood down her face. The release. We were remained transfixed in silence as we watched each one coming out, until finally they were all gone. She was free of petals with blood covering her face and dress. She stared at us and slowly, gracefully walked away, and yet still no-one could speak. 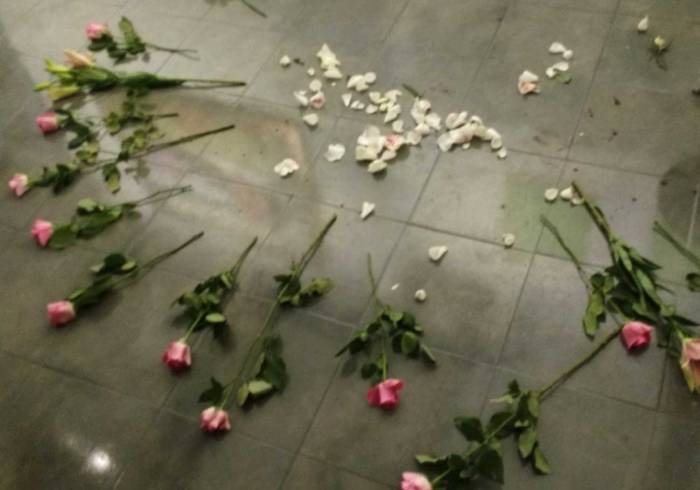 The first words I heard a couple of minutes later were ‘Well she just stole the show’. Indeed she did, wonderfully so. A performance that was both hugely affecting and liberating, difficult and freeing, painful and beautiful, all these things and so much more. Just making us stop and think and consider amongst all the mess of our lives was perfect. Control and action. Delight and debased. Thank you Amy, Thank you Marnie. (EH)

Click on an image ot enlarge or run the slide show….

Marnie Scarlet, post performance, back in the day wear

5 thoughts on “ORGAN THING: Artist Emma Harvey on the performances of Marnie Scarlet and Amy kingsmill at Debased”