This week more than most it might all be about art and paint, well no, not more than any other week really, art never stops as these pages will testify, it just happens that a little more notice is taken of art this week and the various strands of the London art scene get their panties in a twist over it all… There are musical things to excite and entice as well though, Upsilon Acrux are a band we’ve gone on (and on) about in print, on air and here on these fractured electronic pages rather a lot for many a year now, they are one of the finest bands are there, that are pretty much the house band in terms of The Other Rock Show, they’re an ever challenging band, challenging themselves as well as us. The American band are on a rare visit to the UK right now, this is indeed a serious serious musical treat that should be taken up. This Friday they land in London for an show as part of a rather impressive bill at Cafe Oto. I have to rush of to Regent’s Park right now to poke sticks at Frieze, to snarl (and hopefully delight) at what is to be found in the park today, but before that happens here’s some hastily stolen words from others to add to the pages and pages of our own words written about this delightfully hard-boiled truly progressive band. Here them, blatantly stolen from the venue’s own website are the words from Cafe Oto on Friday evening’s show at that fine venue…. 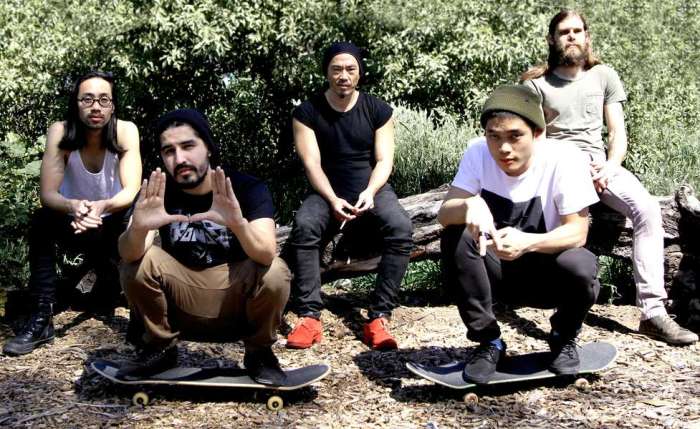 UPSILON ACRUX with exciting guests GUAPO and the excellent HONEY RIDE ME A GOAT, all together this Friday evening, 7th October, from 8pm at Cafe Oto, 18–22 Ashwin street, Dalston, London, E8 3DL….

Upsilon Acrux are an instrumental quintet (dual guitars, keyboards, bass and drums). Their music is generally very intense, loud, hard-hitting and unbelievably virtuosic. Upsilon Acrux’s music is demanding on many levels, but mostly it demands that you listen to it a number of times before forming an opinion, because only after you’ve gotten familiar with it can you get past the sheer complexity and onslaught of it all and hear the amazing musicality of what they are doing. This combination of blazingly fast, interwoven musical lines delivered at blinding speed mixed with their unique melodic sense makes Upsilon’s music instantly recognizable.

Guapo are a British trio that plays an intense music that straddles the boundaries of progressive, noise, minimalism and avant-rock. Their sound has been compared to such artists as Magma, Boredoms, King Crimson, Univers Zero, This Heat, Ruins, Sun Ra and Terry Riley. As Sound Projector put it, “Guapo come on like all the hellhounds of Magma, Eskaton and Ruins were after them…on a par with Magma’s Kohntarkosz or Univers Zero’s Ceux Du Dehors”. The group started their life as a heavy bass/drums duo playing post-hardcore, noisy rock, but in the two decades since, they have expanded their instrumentation and their stylistic references to become one of Europe’s most highly respected ‘muscular and modern’ experimental/progressive rock bands.

“Guapo take classic prog tropes and revivify them…brazenly and gloriously, it brandishes all the hallmarks of golden-era prog rock, but given a steroid boost and stripped of ego.” – The Quietus

Honey Ride Me A Goat come from Kent and seem obsessed with Indian Cuisine and hyper-complex rollercoaster jazz punk. Guitar, bass and drums freak out into an confounding and extremely tight onslaught which bursts with freedom, chaos, fun and nonsense all at the same time. HRMAG have a number of vinyl and CD releases available now on their band camp below.