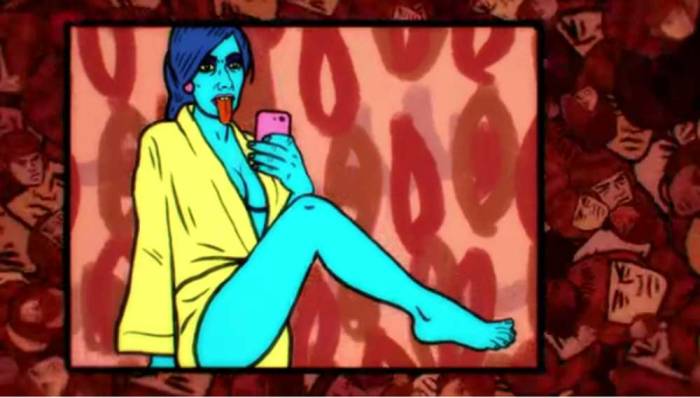 Five more, five slices of music for a Monday, five slice that have crossed our paths at some point during the last few days, five musical things you might like to explore, five slices just because we can. .

1:  PETER KERNEL & THEIR WICKED ORCHESTRA – Organ favourite in all the ever evolving forms Peter kernel tends to come in. A thing? Hello, It’s complicated. Peter Kernel can explain it today. Not that Peter is an actual person, but then you knew that already didn’t you. “You know when you do something that you know you shouldn’t do but you do anyways? And it turns out a mess so you say to yourself “I won’t do… This is an acoustic version of the song “We’re Not Gonna Be The Same Again”. We played it all together for the first time a few hours before this shooting”.

2: DOOMSDAY STUDENT – “Doomsday Student is Eric Paul, Stephen Mattos, Craig Kureck, and Paul Vieira. Made up of members from bands such as Arab on Radar, The Chinese Stars, Athletic Automaton, and Chrome Jackson, one should not be particularly surprised by the level of dissonance, mania, and peculiarity thoughtfully melded into every layer of the music, from unsettling lyrics to hysteric guitars and irregular rhythms”.

“The video for Angry Christmas was directed and animated by illustrator/graphic designer/web designer/filmmaker/musician Luke Boggia. This track is from the upcoming Doomsday Student release, A SELF HELP TRAGEDY.

Doomsday Student have returned bearing their traditionally bizarre gifts in the form of the new single, Angry Christmas. Here is a tale of birth, life, skin, bones, and caved-in skulls, told with rhythms like soldiers trudging through mud and broken car-alarm guitar wails. Add to this the sound of what seems like a chorus of flies buzzing in beautiful harmony, and you have the band’s first single of 2016. Luke Boggia’s video to go with this amplifies all of the qualities of Doomsday Student, equal parts hilarious, terrifying, and provocative: a series of vividly colored animations depicting selfie-taking of different sorts with a steady crescendo of absurdity for the duration of the track. It’s not for the easily offended, but it’s also not simple shock for shock value’s sake. There is more to be heard and seen from them in the future, but for now, Eric Paul reminds us that “we’ve just taken our first breath”. Celebrate” . More from Skin Graft Records

3:  MODO KOAGON   A track apparently from the album “Ebb”, released last year, don’t ask us who or what Modo is, he or they or she or it started following the Organ Twitter account so we had a listen and the slow resonating pleasure has been glowing in here for a couple of hours or more now

4: ARROWS OF LOVE –  The London band have their impressive single out, more defiance, more throwing of musical stones rather than just lying there and taking it, we’ve covered it already but it is worth another mention, and they’ve just posted a video

Here’s comes some of the officail blurb that came with the video – “The new single ‘Beast’, out today (December 9th) via Tape Records, is a full-throttle call-to-arms. This powerful and confrontational anthem fuzzes and spits while frontman Nima approximates a swaggering demigod as if Geddy Lee was howling into a maelstrom kicked up by Sleep. At other moments the mix of mayhem and heaviness brings to mind the likes of Harry Pussy and Black Sabbath playing at the same time”.

Of the new video, Nima says “The footage is from an old 70’s recording of an Iranian Dervish dancing around the desert in his stone garden. We fell in love with this guy. It was amazing watching how his mystic dance went so perfectly alongside this music, each section almost perfectly choreographed, across the decades in a way he would never have known. If we were getting deep we could talk about connections thru time and space, and the one-ness of it all. But we won’t. It’s just a video man.”

A precursor to their anticipated second LP, ‘PRODUCT’, ‘Beast’ was produced by Mikko Gordon (Thom Yorke, Gaz Combes), in the studio he built himself at Goldsmiths University, and mastered by Bob Weston of Shellac.

“Arrows Of Love are, above all, a live phenomenon. Originally aligned with the early East London wave of bohemian rock bands, it was their fiercely independent and creative drive that has taken them across the globe, to the likes of SXSW and End of the Road, to sharing stages with the likes of The Fall, Buzzcocks, British Sea Power, 80’s Matchbox B-Line Disaster, The King Blues and many more. It’s on stage where London’s own Arrows truly hit home”.

5: BIKINI KILL – Because some Mondays you just need an old classic to wake things up a little….