Five? Five, do we need five this week? I don’t like Mondays or silicon chips or deadlines and things were rather Red on Monday, here’s five, Thursdays are the new Mondays,   Here’s your five slices of Monday musical thing, who cares what day it is, here’s a seagull, there’s some music, and someone writing the lyrics to a brand new tune…. 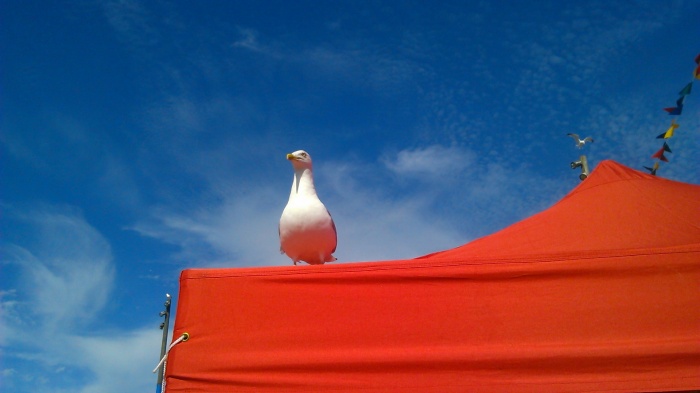 “Roadkill Records is a London based DIY label dedicated to delivering quality releases and events with a focus on garage, psych and surf rock”.

2: PERSONAL BEST – Last time we caught up with Personal Best we rather enjoyed their angergy and their indie pop attitude, we stuck our noses through the door of the Old Blue Last one East London First Thursday evening late last year and there they were playing to a rather full room. “Personal Best are a feisty throwback, alive with 90’s indie pop energy, “spirited power-pop and blissed-out indierama” so they say – “spirited” is a good word, not sure how blissed-out they are live, there’s a lot of positive indie pop energy up on that stage (and indeed around the room). I guess what comes around goes around, we could be in the back room of the Falcon or over at the Sausage Machine or the downstairs bar of the Monarch (before the fly infestation), this tastes of 1994 and zines and seven-inch DIY singles and everything good about the spirit of indie pop…”

Personal Best have a new split single out, “Here’s our half of the split single with Bruising (Leeds) on the Too Pure singles club” they said. Well actually it came out at the end of on January, but hey, deadlines and red things and Fragile things, we’re busy. Here it is then, late, but late is better than nothing and it was only bacause they wouldn’t get out of bed the other day….

3: THE MOLOCHS – a track taken from the AVG Sessions EP, out on March 3rd, you’ve got the link back there at the start, they’re from California, if that one trac khas you curious then here’s a link ot their Bandcamp page

4: LISTENING WOMAN: Meanwhile “here’s my new favorite band, Listening Woman” said Gregory. Well Gregory said it a few months back, intended to post it ages ages ago, hey, we’re busy, what yer gonna do (actually we did, I just check, don’t recall doing it, what the hell, here it is again, 437 times better for you than most of the polite earfood that’s clutteering up the Organ inbox today)

Here’s some Ariana Rainer and some more Listening Woman….

t: TOM ADAMS has announced a debut album release, here’s a rather beautiful first taste, a song called Sparks from the Silence album, the album is due out on May 5th via Kowloon Records.

“Although Tom Adam’s grew up in the flattest part of the UK, his heart found a home in the wild and mountainous places of this earth. Recorded entirely live and set to a wonderfully cinematic yet minimalist backdrop, he announces the release of his beautiful and cerebral debut full-length ‘Silence’ – out 5th May via Kowloon Records. The Cambridge born songwriter/composer effortlessly nestles expansive melodies alongside spellbinding falsetto, his neo-classical approach conveying intense emotion throughout 8 intimate offerings. Here, first cut ‘Sparks’

Adam’s started playing piano as a child but things didn’t fall into place until he bought his first electric guitar as a teenager. He quickly became obsessed with song writing, finding inspiration in his surroundings, “Living in the countryside is lovely for writing as you can leave so much space in your music – the perfect situation for delicate sounds.” A big turning point for him came during his first visit to berlin in the summer of 2014 however; “The night I arrived I went to a Nils Frahm show. After his set he invited a member of the audience to come onstage and play. I got up and the response was amazing.” Frahm’s manager subsequently took him under his wing and went on to introduce him to Kowloon Records. Since relocating to Berlin, he has found himself embracing the idea of noise for the first time, “I have in the past been extremely focused on making things perfect in my music, but now I’ve learnt to accept the noise and embrace imperfection.”

‘Silence’ follows Adam’s 2016 debut EP ‘Voyages by Starlight.’ Recorded as live takes in a single afternoon, the tactile electro-acoustic arrangements received accolades for their shimmering simplicity and the wide-ranging output of synth-guided exploits, chamber pop and melancholic piano-ambient works. Using the studio as an instrument, Adams’ exploratory production techniques left his signature mark on a collection of tracks that echo the ghost of Jeff Buckley circling the musical orbits of modern innovators like Jon Hopkins, Anohni and Jónsi of Sigur Ros…” and on went the press release….

And while we’re here, some supper, you can never have too much supper, supper is recommended everyday, and no ducking out half way through…

“Published on Jan 24, 2017 – A Video illustration and interpretation of Supper’s Ready, the 23-minute long song by Genesis off their album Foxtrot (1972). This was my first attempt at digital illustration and took around 5 months to complete. It was a labour of love, and I hope you enjoy it!” said Nathaniel Barlam