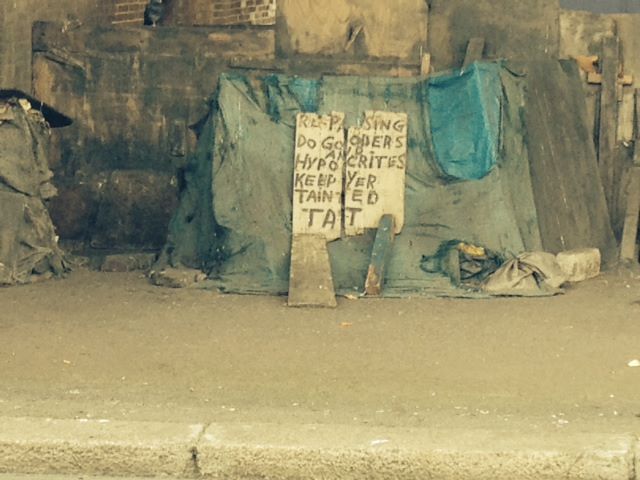 The New Arts & Music Programme at Sutton House returns in February 2018 with the first of the year’s events to be held in the chambers of the Tudor home of Sir Ralph Sadlier, advisor to Henry VIII and Elizabeth I. The first two events, curated by I-D.A Projects and supported by care in the community recordings, happen this Friday and Saturday.  Sutton House is at 2 Homerton High Street, London, E9 6JQ

The first event of the weekend happens on Friday 23rd February and features The Bohman Brothers, D W Robertson (aka Ergo Phizmiz) and Pete Um 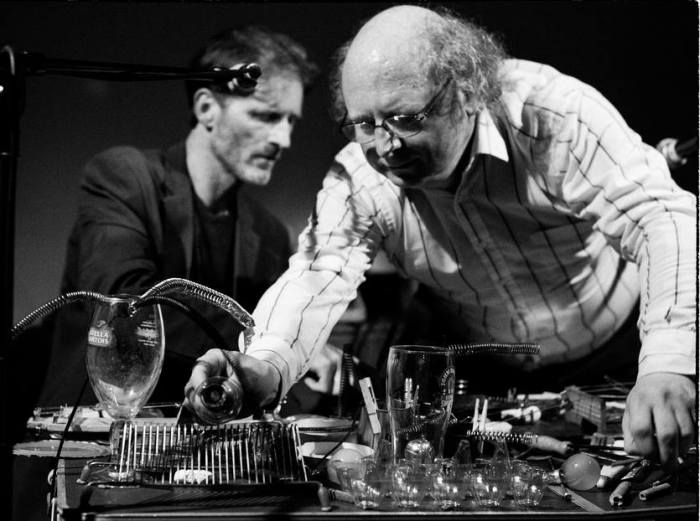 The Bohman Brothers – Known for their unique experimental live performances in the spirit of musique concrète and Fluxus, Adam and Jonathan Bohman have been recording together since 1974 and playing live since 1984. Specializing in magnified sounds and textual dislocation, their table set up, visually resembling something of a hard-wired flea market, employs an array of amplified, and often modified, found objects, with which they improvise a sound world interspersed with readings from found texts. The Bohman Brothers have performed regularly since the mid-nineties including for their own concert series and for institutions such as Tate and BBC Radio 3 and have had numerous notable collaborations such as with Richard Thomas, as Secluded Bronte, and with director Peter Strickland, in whose 2012 feature film, Berbarian Sound Studio, the duo appear. For their performance at The New Arts & Music Programme The Bohman Brothers have visited Sutton House, and have collated literature relating to its history and its original owner Sir Ralph Sadlier, to enable a more site specific response.

Pete Um – Pete Um is” the master of the miniature electro-acoustic song-poem, a form he has more or less invented and crystallised himself, his work displays a sardonic wit combined with a healthy misanthropy in micro-collages of voice, instruments, samples, and electronics”.

“It takes a while to enter Pete Um’s world: his songs are brief, dense and ramshackle; he revels in a reviewer’s dismissal of his live act as “grindingly awkward shithop”, and wears his self-doubt on his sleeve. Can’t Get Started is an ironic title, for Um is prolific across videos, blogs and music. But this 10″, a condensed Best Of, is a remarkable, coherent document, an excellent introduction to Um’s misfit creativity. Whoever compiled this, possibly associate Nochexxx, interviewed alongside Um for an article mapping the Alternative Cambridge music scene (The Wire 325) – has selected melancholy gems rather than eccentric freakouts. These 17 songs don’t waste your time, and repeated listenings underscore Um’s talent for crafting poetic vehicles carrying memories of Holger Czukay and Syd Barrett. (Clive Bell review in The Wire of Can’t Get Started) 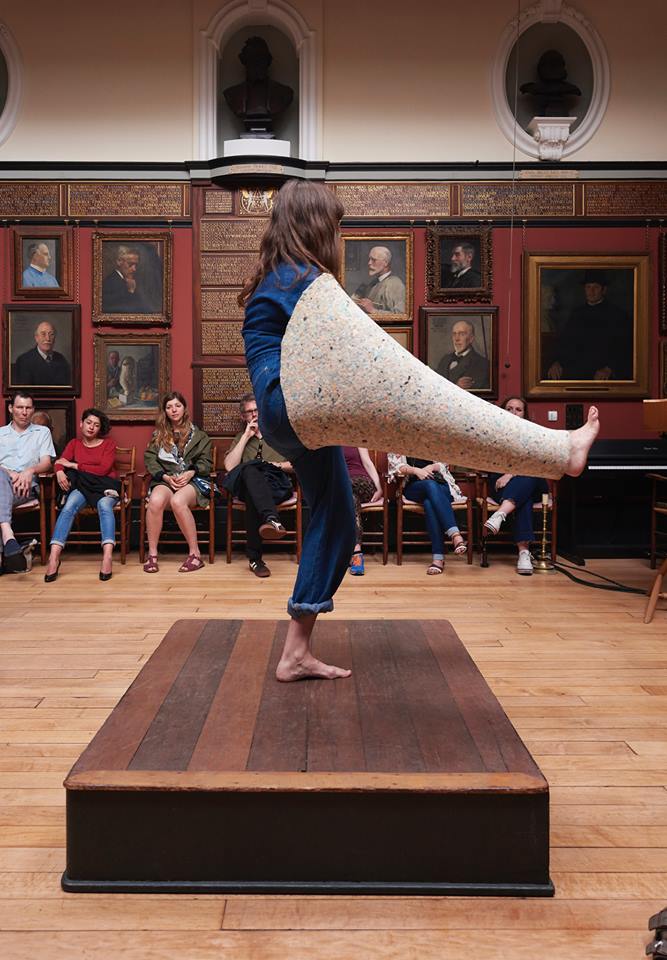 “Moon Must Animal Food” by artist and musician Jenny Moore. Composed for five voices talking and singing, Moon Must Animal Food is about jumping through the black hole, up and out of our bodies, trying to escape sexism via alien abduction; a stretch of ambivalence as objection. First performed at Block Universe performance festival, artist Jenny Moore has loosened and re-worked the score with performers Josz Bitelli, Clémentine March, Fay Nicolson and Eleanor Sikorski accompanied by bendy perspex percussion, a log fire and a weather balloon.

Rebecca Mackenzie is a novelist, poet and performer. Her debut novel IN A LAND OF PAPER GODS, published in 2016, was a Red Magazine Book of the Year and was shortlisted for the Royal Society of Literature Ondaatje Prize. She has performed improvised solos across the capital since 2008, and created shows including THIS IS HAMLET and THE DOLLS’ HOUSE. With composer Reynaldo Young she has developed the LEWISHAM IMPROV STATION, a sound-based project harnessing improvisation to create aural worlds combining poetry, song and story. Rebecca is an approved teacher of Action Theater™ and teaches improvisation in both the UK and Europe. She is a visiting tutor on the Royal Holloway Creative Writing MA.

Seke Chimutengwende works in dance as a performer, choreographer and teacher. He has performed with companies such as DV8 Physical Theatre, Lost Dog and Fabulous Beast and in gallery based works by Trisha Brown and Tino Sehgal as well as with numerous independent choreographers. For his own company Seke Chimutengwende & Friends he has choreographed four works including The Time Travel Piece for The Place Prize 2012 and King Arthur, which premiered at The Yard Theatre in London, 2015. Seke’s current choreographic project, Black Holes, a duet made in collaboration with Alexandrina Hemsley exploring Afrofuturism, will premiere in spring 2018. Since 2006, Seke has performed over 60 improvised solos internationally and has performed ensemble improvisation with Neat Timothy since 2009. Seke is currently a guest lecturer in improvisation at London Contemporary Dance School, The Rambert School of Ballet & Contemporary Dance, Central School of Speech and Drama and Goldsmiths University.

Jenny Moore is a Canadian artist and musician based in London. She plays in the dance-punk band Charismatic Megafauna, leads feminist choir F*Choir, and has recently recorded an album for 10 voices and 2 drummers called Mystic Business originally commissioned by Wysing Arts Centre for Wysing Polyphonic Music Festival. Moore also collaborates with a group of artists as ‘Bedfellows’, leading workshops, performances and talks about consent, desire and lifelong sex education. Jenny Moore has performed nationally and internationally, most recently at Chapter Arts, Cardiff for The Future is Female, Park Nights at the Serpentine Gallery with BBC Late Junction, BFI London with Jarvis Cocker, Barbican with This is Not This Heat, Supernormal festival and has made a series of live interventions for Late at Tate Britain, Tate Modern, Whitechapel Gallery, Camden Arts Centre and various DIY artist-led spaces in London and abroad. Upcoming performances include ‘What Future? What Female’ at Borealis Music festival in Norway and a performance workshop at the Art Academy in Tallin, Estonia. She went to art school twice, once in Canada, once in England.

Josh Bitelli is currently working on a performance commission with Nottingham Contemporary and a song book with Jerwood JVA. Recent projects include Stoptober, Union Gallery; Skeleton Argument, Wellcome Collection; All Doors and No Exits, Cell Projects; London Doctors Choir at Chisenhale Gallery as part of their 21st C Programme.

Clémentine March is a London based musician working in the UK indie scene, in bands like Snapped Ankles, Bamboo or her own solo project, amongst others. Her artistic skills and experience also include filmmaking, performance and theatre.

Fay Zmija Nicolson is a London based artist working with painting and performance. Recent solo projects include: OVER AND OVER PURE FORM, Kunstraum, London, (2016/17); A Community of Sensation, Jupiter Woods, London, (2017); UN MAKE ME; Galerie Rolando Anselmi, Berlin (2016).

Eleanor Sikorski is a dancer and choreographer. Her solo work spans performance, music and film and is made for both theatres and social spaces. She works as a dancer for several choreographers and co-leads ‘Nora’, a trio of dancers who curate and commission choreographers to make work for them to perform.