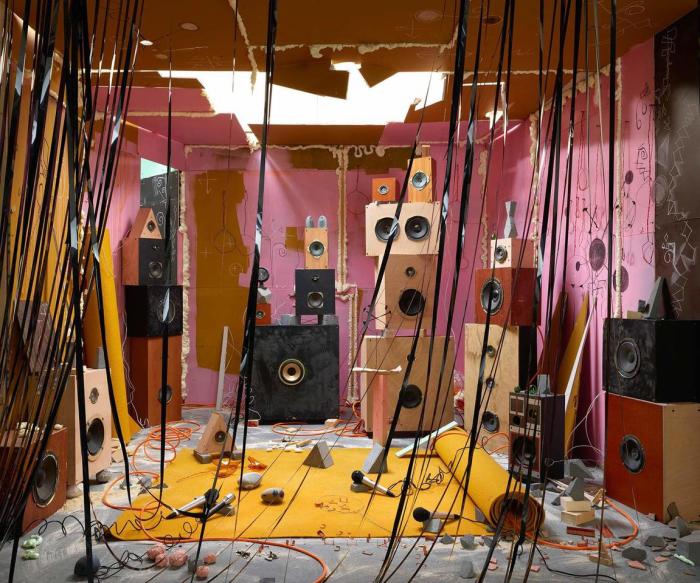 1:  Anne Hardy at the Maureen Paley Gallery – “This is the fourth solo exhibition at the gallery by Anne Hardy where she presents the UK debut of her new film Area of Overlap in a specially created cinema setting. In the upstairs gallery Flutter, a large freestanding photo-structure will be shown”.

“The new short film is made within the landscape of Hardy’s immersive FIELD work, Falling and Walking (phhhhhhhhhhh phosshh-hhhcrrhhhhhzzz mn huaooogh). Created around the sound score she composed for her installation the film moves us through shifting views of that environment. Drawing and sculptural elements form the seating, lighting and complete atmosphere in which this film is experienced.”

“…this is how Hardy usually sets to work: she begins with a mapping process, going in search of places and pieces of land that in some way are situated somewhere ‘in between’. Places that have been forgotten and no longer have a clear function, which she calls ‘pockets of wild space’. This is where she collects materials, sounds and stories; building blocks for her new urban narratives. Her inspiration comes from walks through the East End, a part of the city that she has seen change in the last few decades… and from literature too. During our walk she talks about her favourite books and authors – Concrete Island by J.G. Ballard, Remainder by Tom McCarthy, The City & The City by China Miéville and pretty much everything by Haruki Murakami. What she recognizes in these books is the feeling that other versions of reality exist alongside our tangible reality. For instance, we can all share the same city, but at the same time we have created our own worlds, some of them totally invisible to others. The city is a place that is unique to each of us, where concrete, visible facts – in the form of buildings, streets and people – merge with reminiscences and fictional stories, including the things we make up about our own lives…

…she experiences the city as an entity that is continually in motion and transforming, leaving behind all kinds of materials, sounds and experiences in different places, like a sea which ebbs and flows and washes all sorts of things on to a beach and sweeps them away again. Hardy compares locations like these to the soul of a city, ‘a mental space that perhaps corresponds to the furthest reaches of our consciousness’. This is where the remnants of urban life collect; this is where unprocessed experiences and emotions pile up.” 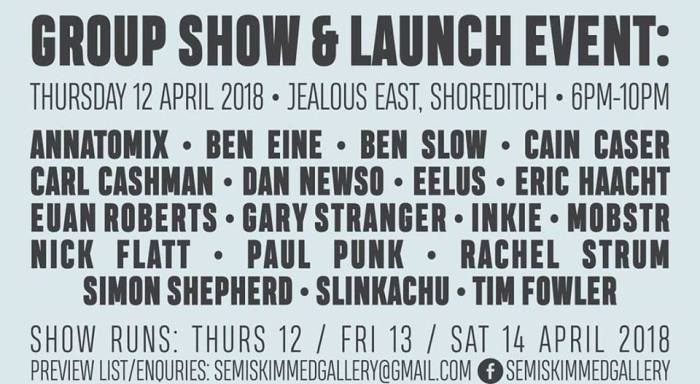 2:  Semi Skimmed Pop Up Show, is just that, a pop up show (whatever that constitutes these days), the first show and the first moves from the nomadic artist-led Semi  Skimmed Gallery, it happens at Jealous East, Shoreditch, East London. “Our first show takes place at Jealous Gallery on 12/13/14th April with some of the biggest names in the urban and Contemporary scenes”,  artists include: Annatomix, Ben Eine, Ben Slow, Cain Caser, Carl Cashman, Dan Newso, Eelus, Eric Haacht, Euan Roberts, Inkie, Mobstr, Nick Flatt, Paul Punk, Tim Fowler , Rachel Strum, Simon shepherd.  The show runs from April 12th until April 14th, the opening night or private view or late opening or whatever the hell you want to call it , is on April 12th   Jealous East is found on the corner, over the busy road junction from the way to expensive Old Blue Last pub at 53 Curtain Road, EC2A 3PT London, United Kingdom. The Facebook event page

Inkie, coming up at Semi Skinned,,,

3:  LG White – Dicks n’ Chicks An Lg White Solo Exhibition – The Underdog Gallery say they are “proud to present a new series of paintings called: ‘Dicks and Chicks’ by LG White”. Opening night is on Friday 6th April (from 6pm until late with a welcome drink and DJ’s).  The gallery say “there is no need to RSVP our doors are open to all”

“This show is dedicated to Livia, wife of the emperor Augustus and mother of Tiberius and all the other extraordinary women of the Roman Empire who subsequently and, against all odds, exerted a huge influence over their world for over 60 years.  Both the ancient Greeks and Romans espoused the ambiguities of sexuality, sexual norms and power in an extraordinary way, remarkably prescient of our own emerging culture.  LG’s work exhibits a sense of humour that flies in the face of today’s out of hand political correctness. History tells us that life is as simple as this: the one who sticks his dick in will be the one who is in power – so it has always been, and so it still is. But, though our world is populated with little Weinsteins and Saviles, let’s hope that women can now stick their dick in too!”

“LG White graduated with her masters in Fine and Commercial Arts in Antwerp where Rubens and many old master painters honed their skills. With the knowledge and techniques given to her by her Dutch heritage and education, she moved around the globe in search of Art: Paris, then New York, LG White finally moved to London in 2010. The UK, about which she is passionate, is the place she now calls home. She recently moved her studio away from London to the south coast of England where there is still fresh air and the space to think and focus: a new melting pot for upcoming Art, reminiscent of the buzz of the 80’s. Her different bodies of work tap into many different techniques and themes, all related to the Zeitgeist and an eclectic journey of knowledge, life, news, multimedia and pop culture!”

“From Pop Art to Fine Art, she has always been intrigued about how to synthesise her rebellious spirit with the formality of antiquity, reworking the ancient world in a contemporary way. Though she likes to treat serious themes with a light but refined touch, she nevertheless sees the world with a serious and critical eye, trying to make sense of all the madness in her Art”. 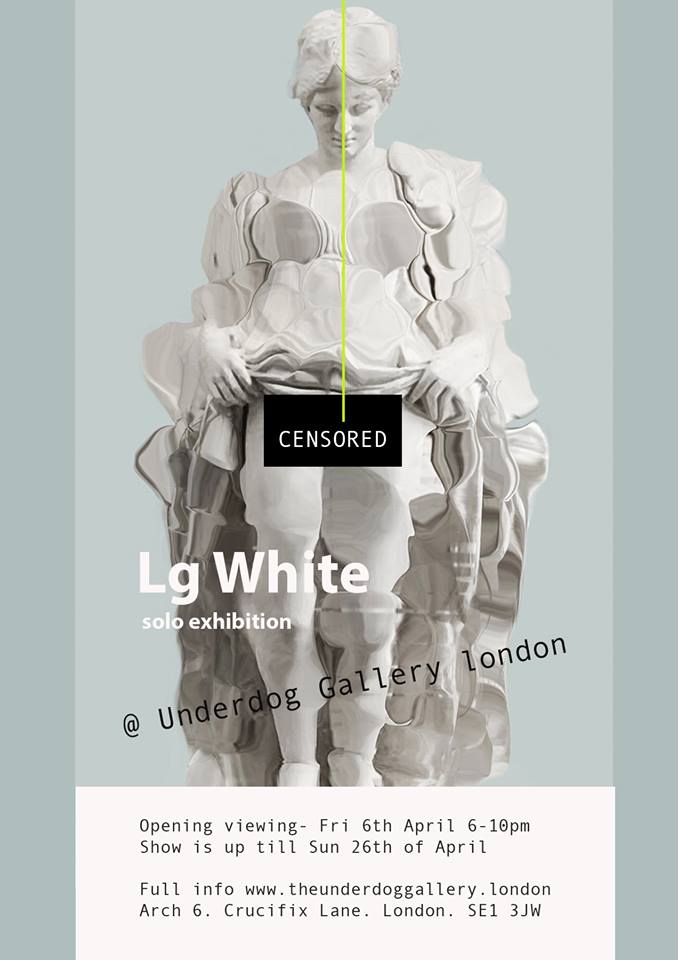 The Underdog Gallery is at Arch 6, Crucifix Lane, London Bridge, London SE1 3JW.  Find the gallery via a short three or four minute walk from London Bridge railway station – leave via The Shard  exit and turn left, The Underdog is approx. 400 meters on the left, just past the traffic lights. The exhibitions dates from Friday 6th April to Thursday 26th April. 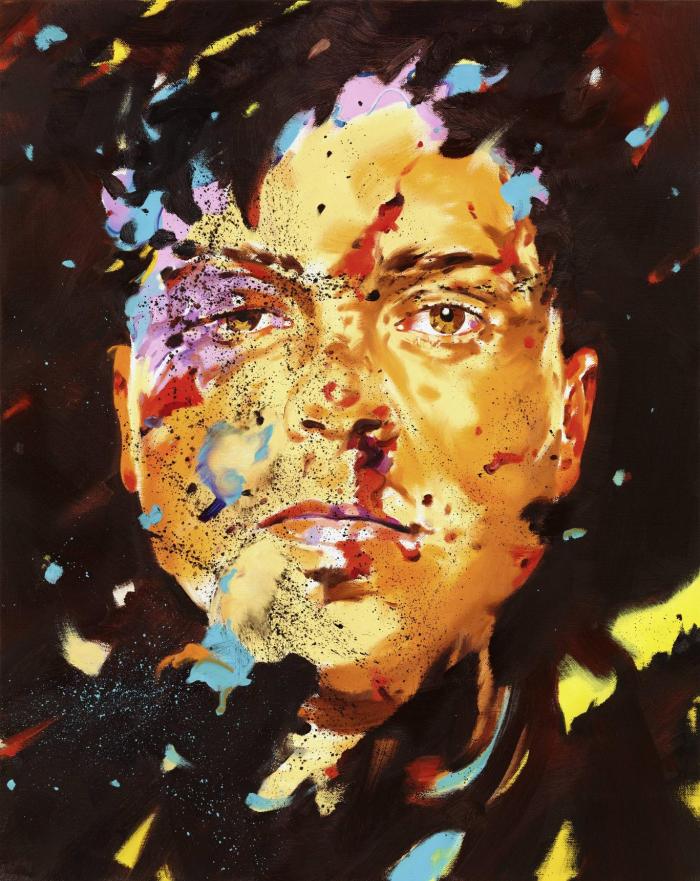 5:  Norbert Bisky – “Anomie” at König London – The term Anomie describes a social condition in which cultural and moral guidelines barely exist, leading to the collapse of society and anarchy. Norbert Bisky uses this expression as a backdrop for his recent paintings and works on paper. The show opens on Friday evening, 6 Apr 2018, 6pm until 9pm and then runs from 7th April until 19th May 2018  König London is at 259 Old Marylebone Road, London, NW1 5RA

Norbert Bisky (born 1970) is a German painter based in Berlin, best known for his frescos depicting adolescents. He was born at Leipzig in the former German Democratic Republic. The son of a Communist official, he grew up in a home in which Communism assumed the power of a religion. He studied from the mid-1990s at the Hochschule der Künste where he was a master student of Georg Baselitz in Berlin and at the Salzburg Summer Academy in the class of Jim Dine. His work is greatly influenced by the socialist realism which was the official art of the GDR. In recent years he has shifted to darker themes of disaster, disease and decapitation while retaining the consummate painterliness which is the hallmark of his work. His figures, in many cases are floating, falling, tumbling, without any gravitational axis. The tumult surrounding the figures is punctuated by the cross pollination of cues from Christian ideology, art history, gay culture, pornography and apocalyptic visions.[2] Bisky transmits an impression of instability on the canvas that distinctly resonates with our contemporary state of affairs. (Wikipedia)