Went exploring art yesterday, we go exploring galleries and art and such more days than we don’t, there’s always another show to see or an exciting to return to or a wall to check out, there’s the current show at Fred Mann’s New Art Projects (Sheep Lane, Hackney, by the canal and parallel to Broadway market), part of the reason we do make the effort in terms of Organ (when we really should have knocked it all on the head years ago when the regular print version came to a natural end, actually the next print version should be on sale at the Art Car Boot Fair later this summer), part of the reason we do make the effort in terms of art coverage is simply because there’s so much going on that just doesn’t get covered anywhere else, that excellent show that’s on right now at Gallery 46 for instance, not seen any kind of coverage beside the words on these fractured pages, like wise the excellent show, the really must see current show at New Art Projects – the delightful excitement of Nicholas Crombach and Brian Paumier’s New Art Projects shows – the show has another couple of weeks to run and apparently no one from the art press has been near it, we really do encourage to check it out, been four times now, every revisit as exciting as the first,

There’s still that buzz when you walk down those stairs to the very white basement and get a first look, that thrill when you see those yellows and whites on the the wall, the rocking horse, the cowboy, or those pieces in the bright yellow green and blue frames that are hung so well, do urge you to go if you can, the space is a brilliant one in terms of viewing art (got to love those silver pipes), it doesn’t cost to get in (although we imagine it costs quite a bit to put these shows on), really don’t know why the art press ignore these exciting things, they seem to spend most of their time posting selfies on their social media feeds and pictures of their latest hats on their websites. There’s two shows on at the gallery at the moment, one artist from the US, the other from Canada, Nicholas Crombach and Brian Paumier, it could very easily be one show though, the to compliment each other so well, it is a beautifully curated show, excellent hang as well, don’t know when you’re going to get a chance to see a body of work from either artist in this country again, really do urge you to go…  Further Organ coverage of the show(s) here – if you don’t go to these things and support these things and cover these things then you can’t expect people to keep on putting them on, don’t take galleries and the people who run them for granted now

The show(s) run at New Art Projects until June 30th.  New Art Projects is at 6d Sheep Lane, Hackney, London, E8 4QS.  Just beside Broadway Market, not far from the Regents Canal and a stone’s throw from Beck Road

Well yes, If you don’t go to these things and support these things and cover these things then you can’t expect people to keep on putting them on, don’t take galleries and the people who run them for granted now, then again there are the galleries that constantly let you down, take the public for granted and make you wonder why you should be bothered with going and supporting art galleries, been to that new place on Vyner Street, at least six times during their advertised hours of opening now, it was good to see a new space opening on the much-missed street, there’s only two galleries left on the once gallery-packed street now, went to check out that new space again yesterday, about 4.30pm on a Thursday afternoon, and once again, door locked, no sign of life, place in semi-darkness, art on the walls, sign on the door clearly advertising the opening times, looks like neither the the sign on the door or the information on the website can’t be trusted, six or more times they’ve been closed during when the website and the sign tells us they should be open in the last couple of months, we won’t bother bother again, if they can’t be bothered with actually opening then why should people bother going to their space? Kind of lets down the other East London galleries who do put the time and effort in.

On with the exploring, the latest show at Modern Art, the other gallery that does still exist on now ghostly Vyner Street, the show wasn’t up to much, first show to disappoint since they took over the big Wilkinson space at the bottom of the road. Went on to check out another couple of East London shows that weren’t worth a mention, and who wants to go look at a load of paste-ups in a gallery when you’ve seen the damn things pasted on every street in the East End far too many time already. With very few exceptions, the paste up really is the most tedious of art pursuits, and these some really tedious examples cluttering up the streets of London at the moment. There was a show of painting at that gallery that charges people just to submit an e.mail of an image to an open call, would have liked to have seen the show, but hey, not in a hundred years, not until they make it clear the policy has changed in terms of open calls… and on we went, up Kingsland Road and on up Stoke Newington Road to Hang Up and the opening night of their Ten show that really wasn’t that good either. Most of the shows that don’t excite us we just don’t bother covering, there’s more than enough in terms of good shows to excite, who needs the negative coverage, but hey, sometimes some things can’t just be politely ignored, can we politely say don’t bother with the politeness of Ten and . Do get to New Art Projects, I might drop in again today, certainly will before it closes. (SW)

Oh and do try and get along to Gallery 46 – these places won’t be here forever, they’re being replaced by a more exciting lifestyle… 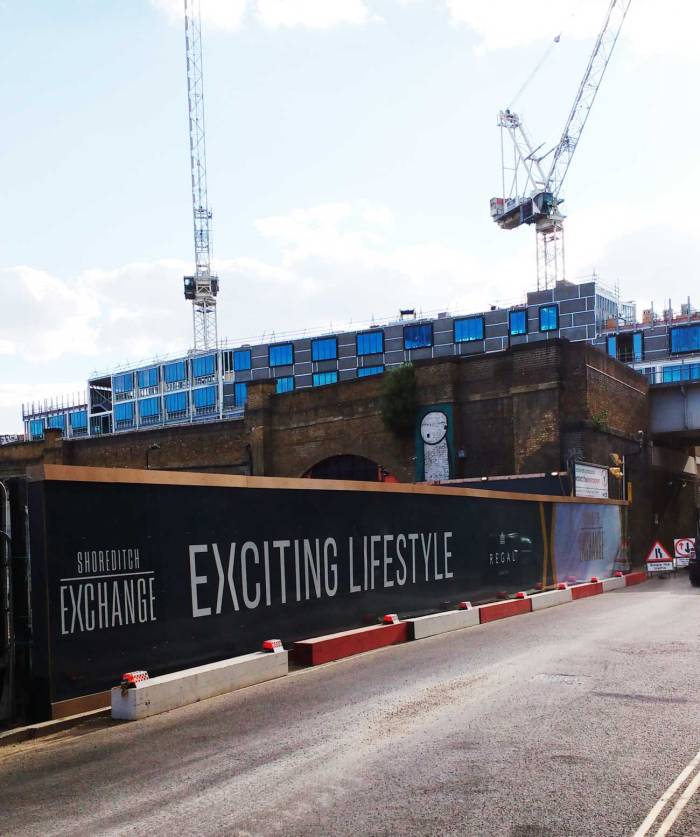