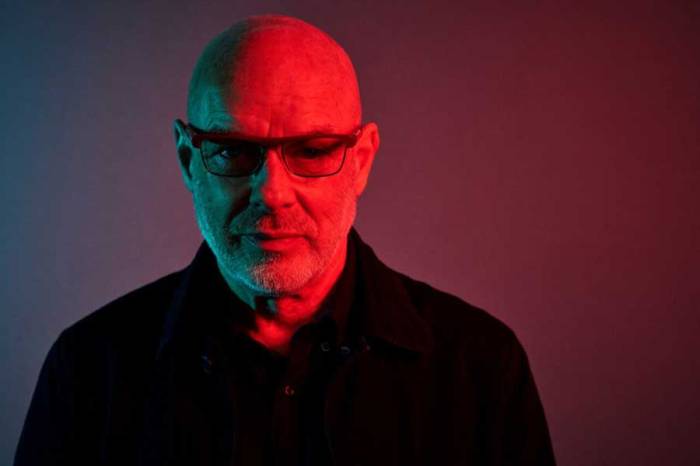 An asteroid named Eno – On Monday evening Brian Eno was presented with the Stephen Hawking Medal for Science Communication at prestigious science festival Starmus V. In a further surprise accolade at the event, this morning the revered musician/producer/artist/activist was also presented with a certificate to commemorate Asteroid 81948 being officially named after him. The official certificate and citation were presented to Eno by astronomer Marc Buie of the Southwest Research Institute, who discovered the asteroid and made the choice for this unique honour, in association with the International Astronomical Union and the Minor Planet Centre. Previously named ‘81948 (2000 OM69)’ the asteroid is newly-dubbed ‘Brian Peter George St John le Baptiste de la Salle Eno’, or ‘Eno’ for short.

In other news, in anticipation of the forthcoming release of ‘Apollo: Atmospheres & Soundtracks Extended Edition’, Brian Eno together with Daniel Lanois and Roger Eno have shared a new track called ‘Capsule’. ‘Capsule’ is taken from the new album ‘For All Mankind’, which is released on July 19th alongside a remastered reissue of the seminal LP ‘Apollo: Atmospheres & Soundtracks’, via UMC.