We have mentioned this before, worth another mention though, always worth another mention, a yrailer for Rebel Dykes, a documentary about a bunch of “kickass women who lived in London in the 1980s”. The film is directed by Harri Shanahan and Sian Williams, and produced by Siobhan Fahey. “Before there were queer activists, before there were Riot Grrls, there were the Rebel Dykes of London. They were young, they were feminists, they were anarchists, they were punks. They were the first generation of sex positive outlaw women, and nothing has been quite the same since”

The documentary film has been made because the history of the London Rebel Dykes of the 1980s, like a lot of things that happened in the underground back in the 89;s and 90’s, are in danger of being forgotten The film, based on interviews with original rebel dykes. It uses lo-fi animation and recreated 80s video footage to retell their stories. It also uses previously unseen archive material from the period, including photographs, zines, music and flyers. The soundtrack is based on forgotten women’s indie and punk bands, remixed by Ellyott from Sister George and Night Nurse –
rebeldykes 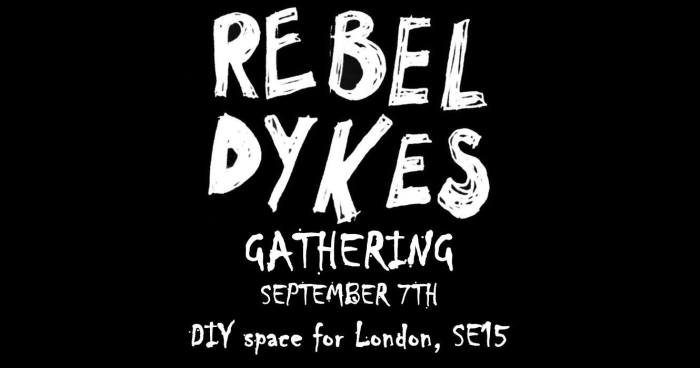 There’s a gathering on September 7th over at DIY Space for London (96-108 Ormside Street, London, SE15 1TF) – “We are having a catch up, and everyone is welcome! Come from far and wide and celebrate the Rebel Dykes family, the archive we have been collecting and the film we are making. This is an all-generations (over 18), all-genders get together of the REBEL DYKES family – EVERYBODY WELCOME! We’ll be discussing the progress of the film and the archive and sharing it with you all, including some original material. We’ll be filming some extra footage we need to complete the film. The Rebel Dykes family will be sharing their songs and words and talent with us all. There’ll be poems and cabaret and DJs. Rebel Dykes Gathering is a loving, inclusive, fun safe space: All ages, ethnicities and genders are welcome. Hate is absolutely not”. More details, via the Facebook event pageFacebook event page

Meanwhile in some very much positively related news, the once awfully named but rather brilliant band who were called Graveyard Junkies, a band previously featured on these fractured pages, have thankfully changed their name to Garbitch, now that’s a far far better name.  Here’s what they had to say recently – “Sorry for the lag on posting recent shows. We’ve played at Berkley’s Anarchist Gathering, San Diego’s Che Cafe, LA’s Church of Fun, and so many more that you’ll see posted soon! This name change means finally NO MORE PROBLEMATIC/TOXIC MEMBERS. Qpoc/femmes safety is priority at our shows. Our EP link in bio is very riot grrl sounding and we plan to stray more towards hc, sludge, and some grindcore in this next one. Posting pics from very badass photographers tomorrow. Thanks for keeping up with us and keep in mind WE R NOT AN ALL GRRL BAND! non binary, gender queer, AND cis bitches. -GARBiTCH PS. The name “gRaVeYaRd jUnKi3s” was cringe af and sounded like an edgelorde bronies band who is into GG Allin & Sex Pistols…<333″..

ORGAN THING: “We only make music so you can indulge your anger” so say California’s rather beautifully uncompromising Graveyard Junkies