That Five art things thing, it kind of got locked down with the rest of us, everything closed, no new gallery shows to recommend, no galleries to go to, no art to stand in front of and get excited about, no sculpture to walk around, no paint to froth over and it is about the texture of paint, the dimensions, the way the light falls on a painting, the way it lives and breathes and follows you around the room, no, you can’t do it on line as much as some of us are trying to do just that, no, we need galleries.. Digital art on the whole leaves me cold, video screens just don’t do, digital exhibitions of analogue art on a computer screen can do little more than hint at what you’re missing out on, digital art in an actual art gallery throws up all kinds of questions and yes of course it has a place but I need paint, I need paintings of walls, I need actual galleries, I just can’t get excited about a virtual walk around The Tate via my computer screen, I’d rather pour over a book that be lead around a virtual show on a cranky computer or heaven forbid a tiny phone screen, but these are strange times, these are gallery-free days, we haven’t caught that excited buzz of chat you hear well before you actually turn a street corner and get to an opening night of a show at a gallery for two or three weeks now, we need art, I certainly do. So we can’t recommend five new London gallery shows like we like to do on something like a weekly basis on these fractured pages but we can recommend five art show things that are kind of happing via the magic of the internet should you be that way inclined, it isn’t perect but we can’t let perfect be the enemy of good… 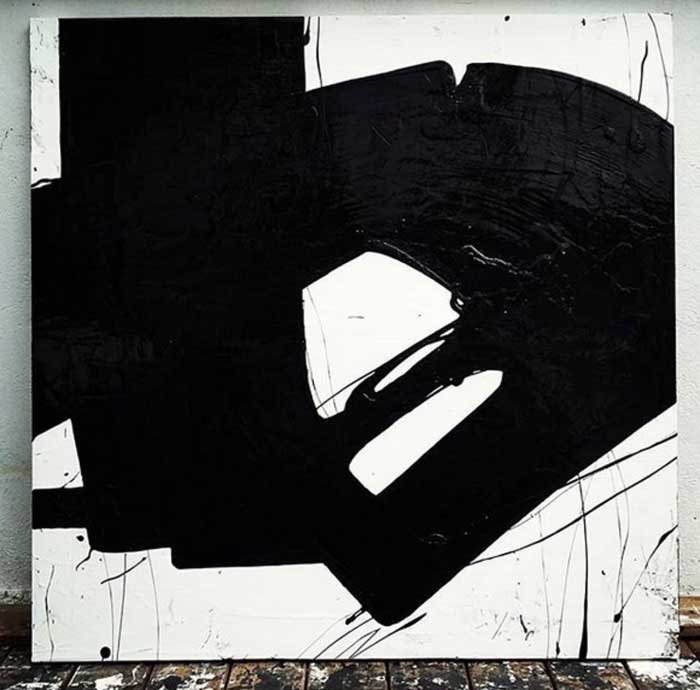 Five recomended on-line art shows and such in no particular order,,,

1:  James Irwin at Annka Kultys Gallery – 5th April until 11th April via this link – “Annka Kultys is pleased to present James Irwin’s video Surface Collider (23032020) (2020) as part of the gallery’s first online exhibition Stay at home, a presentation of new digital works produced by artists in immediate response to the coronavirus pandemic. On every Sunday of the lockdown during Stay at home, a new artist will be showcased on AKG’s recently launched online platform [The art happens here].

“AKG is also announcing all gallery benefits (i.e., profits after the artist has been compensated in the usual manner) from featured digital works sold via [The art happens here] will be donated to coronavirus research charities. The purchasers’ generosity will also help to financially support the featured artists during this unprecedented period when non-essential shops are closed, including art museums and commercial galleries, leading to postponed exhibitions for artists, and ensuring at least part of artists’ incomes can be maintained. James Irwin’s project Surface Collider (23032020) is a digitally manipulated video of British prime minister Boris Johnson’s historic speech announcing on the 23 March 2020 the very strict lockdown for the United Kingdom as part of the government’s response to the coronavirus pandemic, where the British people were instructed they should only leave home for basic necessities. Surface Collider (23032020) explores various issues and opportunities that arise when confinement is forced on the entire population, from not being able to have any physical social life, to surveying the extraordinary power the state has on taking away what seems to be an inalienable right of freedom of movement in response to an ‘unforeseen’ global pandemic event”

2: Cultivate Presents #43Artists – open now and until whenever (no need ot take it down), view the show here –   And yes, even though we see them as no real alternative to proper physical at show, we did open our own on-line art show last Thursday evening, it was something we were doing anyway, the 7th Cultivate on-line exhibition, these things do have their place, they are valid, t has been exciting to see the hits and the views coming in from all over the world, to be able to feature artists who really can get involved in our physical East London shows. The #43Artists show opened last Thursday evening, it was viewed over 7000 times in the first hour and now five days on the show has been view by people from all over the world just over 35,000 times. The carefully selected carefully curated work of 43 artists, some names familiar to most, some names new The #43Artists group show can be viewed here, via these Organ pages where the show is being hosted on behalf of Cultivate gallery. 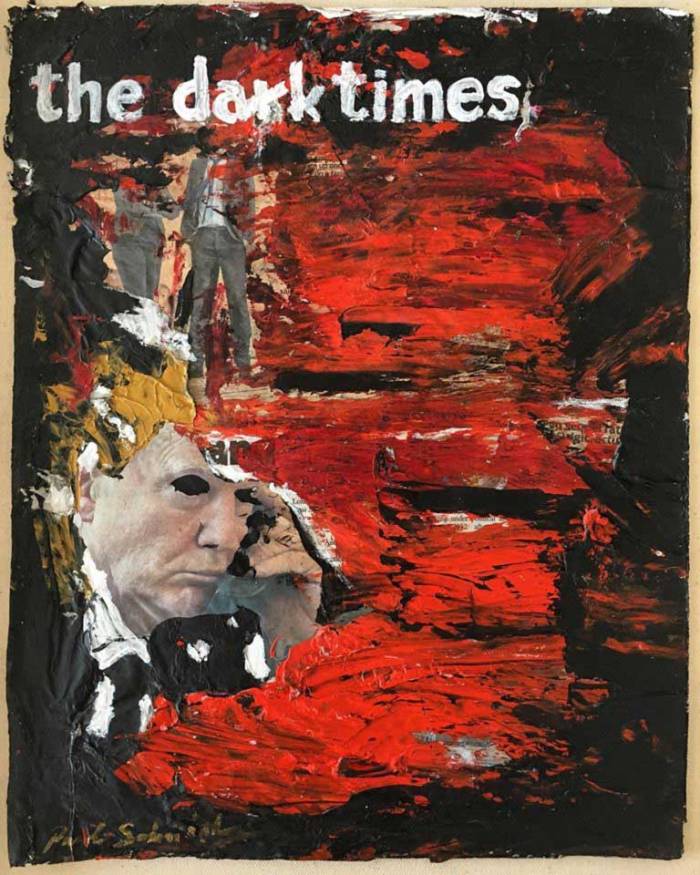 3: Yoon Hyup, Kaleidoscope at StolenSpace Gallery – 6th April until 3rd May, on-line, view the show in VR form here  “Kaleidoscope is a solo show of new works by Yoon Hyup. Based In New York and born in Seoul, Yoon’s work beautifully encaptures the vivid lights of the bright city landscape, using his abstract painting technique composing of free flowing yet structured lines and dots”. 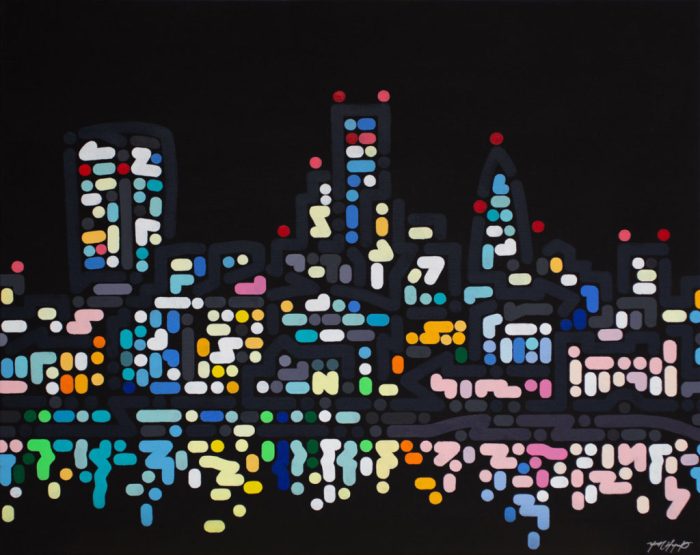 “Yoon began painting walls in the early 2000’s, and created live paintings with DJs alongside improvisational music. His spontaneous painting style developed through using lines and dots to create imagery for a fresh, bold impact. His artistic style is also inspired by his skateboarding background, which he participates and takes influence from still today. His accumlative experiences with music, painting and skating all come together to create his current aesthetic, which is both unique and nostalgic. His Korean roots are respected through his use of Korea’s primary colors (red, yellow, blue, black and white) and cloud patterns which can often be found in his abstract works.  Yoon has noted his diverse range of influences across the arts, including Jean-Michel Basquiat, Futura, DJ Krush, Don Pendleton, Nam June Paik and Ed Templeton. Rhythm and flow can be noted in these influences, and are expressed in Yoon’s artistic work, as well as in his skateboarding. He doesn’t sketch his work out before, rather he uses free-hands to create his canvas and wall paintings. He likens this method to a jazz performance, which only has a plan, but plays entirely impromptu. His preference for expressing himself using lines and dots emerged from his emotions when he is skateboarding, which he describes as feeling like he is flowing water. This experience gives him the motivation to paint this rhythmic flow in the purest form of expression, staying true to both his geographical and artistic roots”. 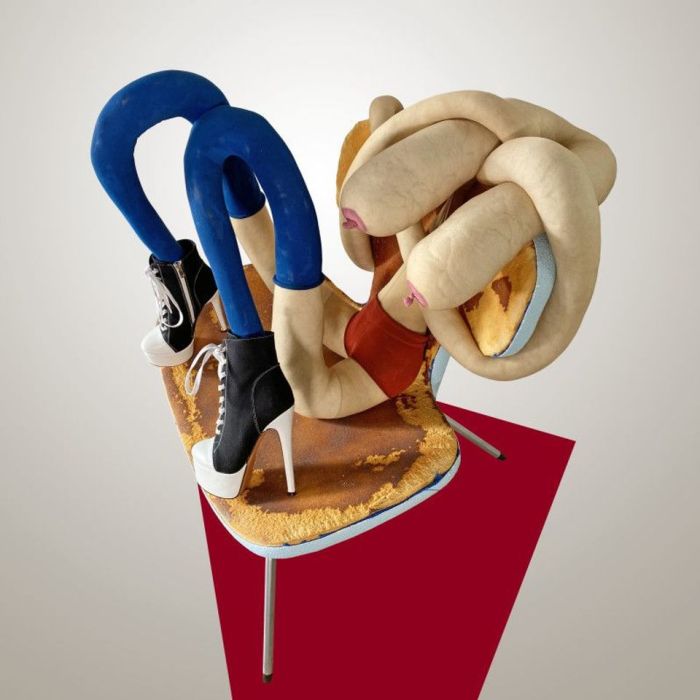 4: Sarah Lucas, Honey Pie at Sadie Coles – we did recommend this three weeks and then well, you know what happened, the show didn;t get to open, but you can view  it virtually via a video now, yeah I know, hardly the same and it would probably benefit from the addition of some stong still shots but hey “Sadie Coles HQ presents Honey Pie, an exhibition by Sarah Lucas featuring ten sculptures that extend her long-term Bunny series into dynamic new forms” – okay so the arts press probably will cover this one but that doesn’t mean we shouldn’t, we like Sarah Lucas, why wouldn’t we?

“The exhibition consists of several sculptures made from stuffed tights and found objects, alongside an equal number of works in bronze and concrete. First conceived in 1997, Lucas’s Bunny sculptures evoke female nudes reclining on chairs in states of abandon and vulnerability. Employing the same everyday materials, the soft sculptures in HONEY PIE develop this formula through anatomical contortions, flamboyant footwear and chairs of eclectic shape and size. Bright colours applied to the figures’ limbs give them the appearance of a surrealist chorus line, at once exotic and comedic. Lucas has elevated the works on a series of plinths that reinforce their individualism, resetting the balance of power between sculpture and viewer.

Lucas’s soft sculptures are mirrored in five bronze and concrete works. Employing the same figure-chair composition, these stand in striking contrast to the fleshiness and bold colour of the soft figures – as if animate bodies have transmuted into statues or icons. Cast from soft prototypes, the hard sculptures consist of polished bronze anatomies – extruded, tubular forms with high-gloss surfaces – each posed on top of a chair rendered in concrete and metal. “They’ve got more of a ghostly quality – like something left over from another age,” Lucas has stated. “It’s a mixture of the hard and the soft, and the colourful and the austere.”

Lucas has arranged the sculptures within a cruciform structure of concrete and MDF that splits the gallery into quadrants. In their style of presentation as much as their rhyming forms, the works look back to earlier shows such as Bunny Gets Snookered at Sadie Coles HQ in 1997 (where the Bunnies were scattered around a snooker table) or NUDS in 2009, where she first began to use plinths in the form of breeze block stacks. In the new show, plinths in various shades of yellow compound the painterly aspect of the sculptures. In contrast to the literal debasement of the original Bunnies (most of which were placed on the floor), the plinths raise the works to eye level or higher, amplifying the swagger and exuberance of Lucas’s cast of characters.

These attributes are reflected in the works’ titles. DORA LALALA resembles a contortionist winding her legs into a bow; SUGAR consists of a bouquet of breasts on nimble pink legs. The chairs and shoes are themselves multifarious in design and import – from the scrolling campery of an ironwork seat to the hyperbolic femininity of platform boots. At the same time, Lucas’s soft and hard muses continue to channel themes that have defined her work from the beginning – whether the anthropomorphic charge of found objects, the objectification of the female nude, or the elusive line between comedy and abjection.

The exhibition follows Lucas’s first retrospective in China, at the Red Brick Art Museum, Beijing, in 2019, and her first US retrospective at the New Museum, New York, in 2018 (Au Naturel, curated by Massimiliano Gioni and Margot Norton), which travelled to the Hammer Museum, Los Angeles in 2019.  A concurrent presentation will be on view at Gladstone Gallery, New York, opening 06 March 2020” –  Sadie Coles

5: Jakob Kudsk Steensen’s The Deep Listener at The Serpentine – with the Spring sunshine kicking in we’d like to be heading through the park to The Serpentine, we can’t though, and well, The Serpentine has “an ongoing online initiative to bring art into your home”. Right now you can explore Jakob Kudsk Steensen’s The Deep Listener as part of the gallery’s Augmented Architecture Project. Steensen’s audio-visual ecological expedition guides you through Kensington Gardens and Hyde Park , if you fancy a virtual stroll outdoors and frankly I don’t, it feels like being offered a virtual cold pint of draught beer to me. Jakob Kudsk Steensen’s work melds nature, art and imagination with sounds taken from the natural world and paired with, well go have a look should you wish.

I  don’t know, virtual shows and videos aren’t donig it for me, the Cultivate slide show format does do it to some extent, frankly we were digging about for a fifth today, let’s see if anyone comes up with soemthing better, maybe we will have to put the Five Art Thing thing on hold until we can gather together in galleries and drink cheap wine and warm beer.

Once again, just like yesterday, all the paintings and pieces of art on this page today, other than the images that directly relate to recomended shows, including the Geraldine Swayne piece at the head of the page, are pieces that feature in the #43Artists online show that can be explored here,