Five more musical things that have come ot our attention in the last few day, I guess I should write an editorial? But then why should I? Let’s just cut to the chase, here you go, some new music, some art, some old music, some more art…

1: Public Body – Rather like the pointy new wave feel of whoever this is? “Public Body share new single”, I don’t tend to read press releases until the music has doing a little talking. Apparently this is Public Body, they’re sharp, they’re pin-point smart, well on the evidence of this one taste they are, they don’t care about walking any more, there’s a need for speed,  I don’t know much about them, here’, you can read the press release – “Over the last 12 months, Brighton’s Public Body have been steadily building themselves a reputation as an intriguing post-punk prospect, with a keen eye for detail. Putting modern life under their microscope, they pick over the minutiae of the day to day, and find a world that is either a) not paying attention or b) not listening to those that are. In their own mission statement, the band say they aim to “write the perfect soundtrack to whatever you do whilst procrastinating at your day job.” but it is their own sense of focus and direction that propels them into vivid new territory on new single “Naughty On My Bike” – thee you go, here’s the music…

Here’s another Tom of Brighton painting, not really sure who Tom of Brighton is, other tha na painter called Tom who’s probably from Brighton, see more of him via the #43Artists show

2: Roly Porter – a taste of the fourth solo studio album ‘Kistvaen’, an album that takes its name from a type of granite tomb found predominantly in Dartmoor, south western England. Scattered across the moorlands, the kistvaens were often found covered in a mound of earth and stone. They housed dead bodies, allowing them to lie facing the sun. Thealbum is due out on 5th June via Subtext Recordings

“With ‘Kistvaen’, Porter speculates on the burial site as a mirror, or a gate in time. Excavating stories and images of ancient burial rituals, the record teases out similarities in emotional and social rituals between the Neolithic period and today. While a myriad of social, cultural and technological factors drastically differentiate our contemporary period and the end of the Stone Age, certain affinities may still be found in experiences of death across eras. Venturing across histories, Porter soundtracks a moorland burial unanchored in time. Raw, unprocessed vocals are folded into field recordings made in the area, wordlessly relaying tableaus of burial rituals in Neolithic Dartmoor. ‘Kistvaen’ features three singular vocalists: Mary-Anne Roberts – from medieval Welsh music duo Bragod, Ellen Southern – of Bristol’s Dead Space Chamber Music group, and Phil Owen – a singer and researcher in vocal traditions.

‘Kistvaen’ contrasts primordial motifs with that of the 21st century life in designed environments and an evolving virtual existence. The music blurs boundaries between field recording, folk instrumentation and digital processing, which although beatless creates a profound effect using dark ambience, deep electronics and immersive sound design. This is otherworldly sonicnecromancy, where long dormant spirits are evoked, summoning an extremely heavy presence. The pieces that comprise ‘Kistvaen’ were developed for an AV performance of the same name with visual artist MFO, which has appeared at Unsound, Berlin Atonal, and Sonic Acts. The longplayer was recorded during various rehearsals/performances and also at BinkBonk studios in Bristol”.

Pre-order details and such via Bandcamp 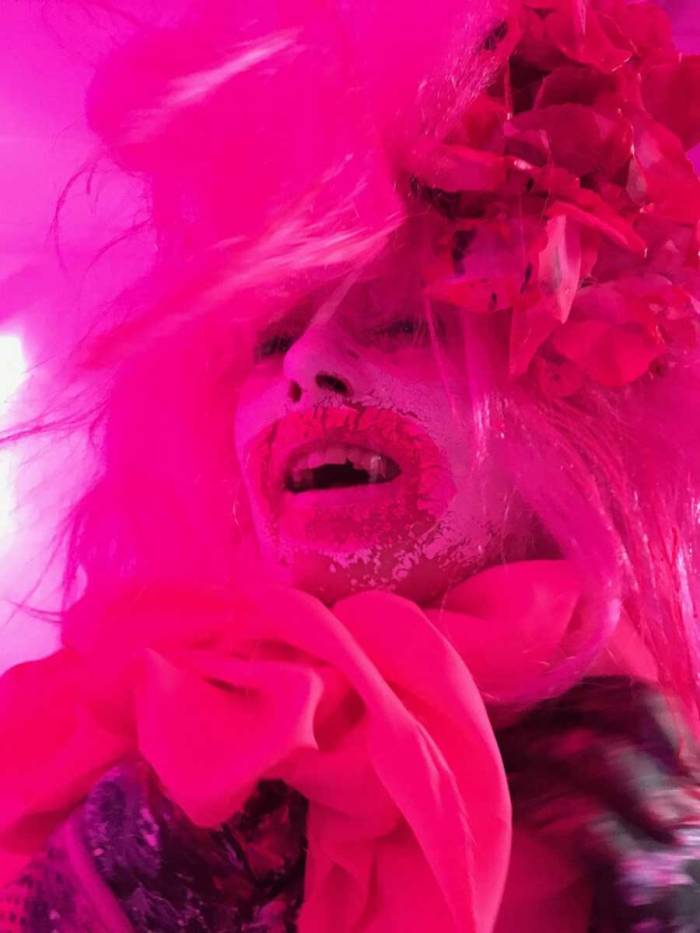 206: KELLY SWEENEY – A still from one of her films

3: Nick Pynn is always rewarding in his own quiet and rather beautifully understated way, he performs original compositions on violin, mandocello, steel-string guitar, lap dulcimer, theremin, 5-string banjo and wine glasses, whilst live-looping and bass-pedalling with his feet, mostly he writes great songs, songs that are embroidered with fine detail. This album you can hear here is ‘Buffalo Orbison’ the first of two albums that we’re told were “originally to be a double release, put out in two halves”. The second half, ‘Flipside’ comes out on May 1st, mote on Flipside in a day or two….

3 and a bit: Tasty Granny – Don’t ask us what they’re about and where they got that name, ours is not to reason why, they’re from France, surely that’s enough in terms of explanation?  We missed this one, it dates from a couple of years ago but hey, better late than never, we’ve never set much stall by release dates, more via their Bandcamp

4: Hania Rani – “”I feel like ‘Home’ is a second part of the same book, that the start was in ‘Esja’, a musical prelude to a real plot. I feel Home is a story with an ending, so the next book can tell a totally different one. I am constantly looking for new ways of expression. I am curious where ‘Home’ will lead me and my music”. — Hania Rani

“Hania Rani is a pianist, composer and musician who, was born in Gdansk and splits her life between Warsaw, where she makes her home, and Berlin where she studied and often works. Her debut album ‘Esja’, a beguiling collection of solo piano pieces on Gondwana Records was released to international acclaim on April 5th 2019 including nominations in 5 categories in the Polish music industries very own Grammys…” you can read lots more on the Bandcamp page where you will aso find details of the new album Home that is due our in May of this year

5: Tatsuya Nakatani is an avant-garde percussionist and composer, active internationally since the 1990’s, you rad all Tatsuya via the Cuneiform Records Bandcamp page, there’s a new album out this month, rather like the space and hints of noise between the carefully placed notes…

And before we head off to do whatever we’re supposed to be doing today, here this adteroon slice of classic anarcho punk from the last century, we all need a slice of Civilised Society from time to time…

The images on this page are pieces of art featured in the  current Cultivate on-line art exhbition that can be explore here on these very Organ pages, view the whole show here, go run the slice show of some 250 or so carefully slected pieces of art

Just how good does this sound?