Today’s Organ Thing of the Day come to you via Don’t Walk Walk Gallery, a gallery based in Deal, an English seaside town in a Kent and a gallery who proudly proclaim “no boats, no seagulls, no beachhuts”  I don’t know, I always thought seagulls ad a hint of punk rock about them.  “Don’t Walk Walk opened in March 2017. We are an independent gallery in Deal, Kent boasting a ‘punk rock’ ethic and a strong desire to offer something a little different”.  Today the gallery have posted a short film featuring artist James Johnston.

“Artist and Musician James F Johnston is no stranger to the darker narrative. Fronting his own band Gallon Drunk and subsequently, playing with Faust, Nick Cave & the Bad Seeds to more recently with PJ Harvey he has a wealth of experience to pull from. This interview finds James in lockdown due to Covid-19 but he shares insights into his painting practise and gives us a candid tour of his studio, which in his words “has been a lifeline of late””

James has featuured on these Organ pages a number of times both in terms of his painting and his music, he recently featured as part of Cultivate’s #43Artists on-line show that was and indeed still is hosted here via Organ, those images just down there are from that #43Artists show.

ORGAN THING: From Isolation is a series of collaborations from Trestle Records as a reaction to the self-isolation, hear the first two releases here, the third, featuring James Johnston, Ross Downes and Keeley Forsyth is out later this week… 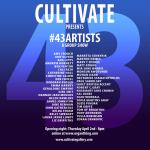 71: JAMES JOHNSTON – ‘I opened my eyes, Joe. The night had been a giant, dribbling and pacing the boards.’. A larger painting RECENTLY included in a show CALLED: ‘Words that transform, vibrate and glow: 13 paintings inspired by the lyrics of Nick Cave’, that happened at Charlie Smith Gallery in London back in January 2020.