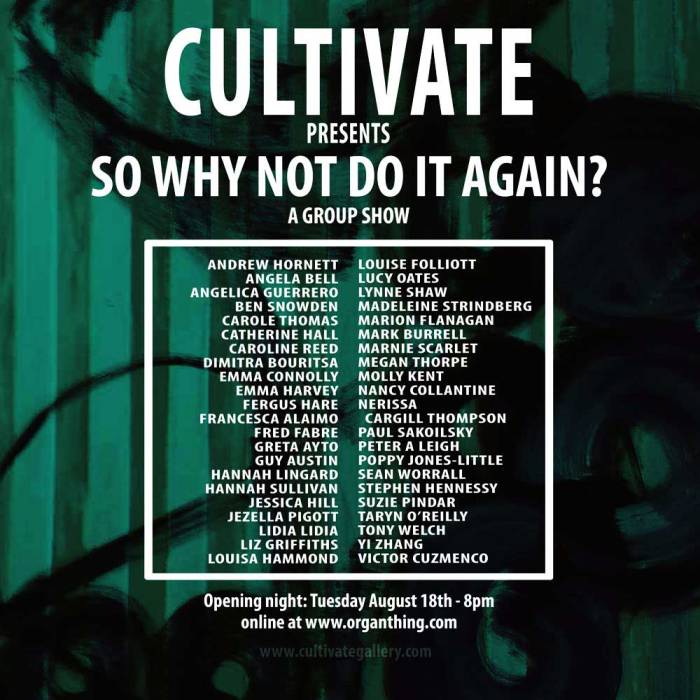 We hadn’t planned on hosting a fourth Cultivate on-line show here on these Organ pages during 2020, then again any plans we did have for 2020 went out the window ages ago. We did actually start running on-line shows alongside the physical Cultivate gallery shows back in 2017, well before this damn covid thing infected everything (Cultivate is, as you probably know, brought to you by the makers of Organ). We were always going to curate one on-line show this year alongside the physical Cultivate gallery shows that we were planning. We’ve ended up putting together three on-line shows so far this year and well, the reaction has been positive, the feedback great and the visitor numbers brilliant, so why not do it again? Why not a fourth on-line show during a year where we’ve mostly been in lockdown?

So Why Not Do It Again? will open on-line at 8pm on Tuesday August 18th via the Organ magazine website at www.organthing.com – of course once the show is open it stays open, why should an on-line show ever have to close? The links to the previous on-line shows are all on this page, all nine previous shows can be viewed at your leasure, here

So Why Not Do It Again? will be the 10th on-line show from Cultivate and we think the 157th Cultivate show since that Netll Market takeover back in the summer of 2011 (something like 157 anyway, we might have missed on or two). We have curated three on-line shows during lock down while the galleries have all be closed and the fairs and event are on hold. We had thought three was enough but hey, the viewer numbers were brilliant, each shows now viewed over 40,000 times, so why not do it again while we’re waiting to get back to proper physical galleries and art car boot fairs and street parties and such, we really enjoyed curating the previous three, so why not?

So Why Not Do It Again? will open on-line at 8pm on Tuesday August 18th via the Organ magazine website then. We have once again personally invited the majority of the artists, but as always the flow of artistic new blood (or new blood to us) is very important. There was once more an open call aspect, we said we would like to have around a dozen artists we don’t actually know about yet when we put the call out last month, we do actually have a show that features 43 artists, half of those involved new artists to Cultivate. Please do check out one of the the recent previous on-line shows via the Organ website.

So Why Not Do It Again? will one again be curated by Cultivate founders Sean Worrall and Emma Harvey, the show opens via the pages of Organ on Tuesday August 18th at 8pm UK time

One thought on “ORGAN PREVIEW: So Why Not Do It Again? A fourth on-line art show of this rather fractured year opens this Tuesday evening…”