There’s never enough time in the day, never enough time to time to throw all the paint that needs to be thrown, or listen to the music that needs ot be listened to, or deal with all the growth that needs ot be tended to, certainly not enough time to get to all the art shows or to check out that band or… and so the opening night and all the promised interaction was missed, but hey, it isn’t all about the opening and although it feels like something has beem missed this time, still enough to explore on the quite static walls of the Lazarides gallery.

A rush down to Tottenham Court Road, good to see the Sir Eduardo Paolozzi mosaics in the Tottenham Court Road underground station restored and looking as good as they always did – “Mosaics by the British Pop Artist Sir Eduardo Paolozzi in Tottenham Court Road underground station have been re-enstated after a public outcry and petition, signed by over 50,000 members of the public. The works of art have now been restored and are viewable in the station”.  (so said Artlyst).  Can they restore the Astoria, the Marquee and Soho now please, those mosaics felt like long lost friends, flashbacks to the Royal George, the garage girls and carrying bags of flyers to Atom Seed gigs, good to see them back, for once protest worked…

. A dash down to Oxford Street for a quick flavour Unkle land in Lazarides before we head for the Tim Noble and Sue Webster Sticks With Dicks and Slits opening at Blain Southern. Feels slightly wrong to be running around West End galleries on the first Thursday of the month, almost disloyal, but hey, we’ve gone on about the failures of Whitechapel Gallery and the way they’ve let down the now fractured disconnected East London art scene more than enough on these pages, we’ll go where the art is and tonight we’re running around central London.

“Inspired by the desire to marry music and the visual arts, Daydreaming With… is an art exhibition series, which aims to create a unique and multi-sensory experience, unprecedented by museum exhibitions or music festivals”. 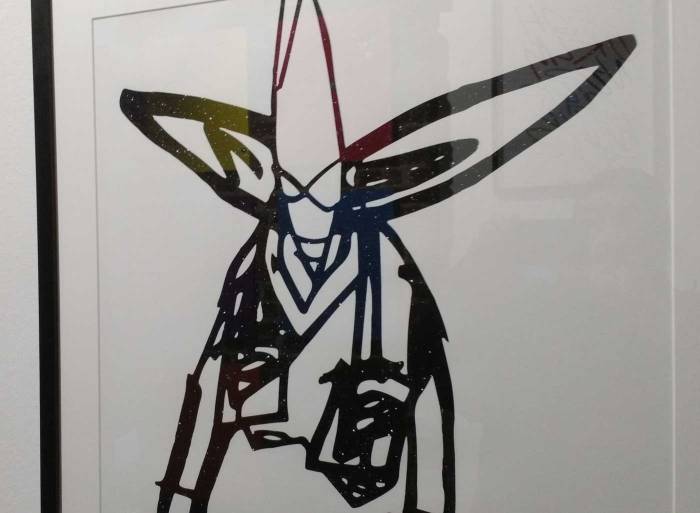 “Mo’Wax and UNKLE founder, artist and DJ assumes the role of curator for each Daydreaming with… project. For the inaugural exhibition in 2010, Lavelle showcased original, previously unheard music, composed specifically for the exhibition, alongside artwork by a selection of around 30 artists, from the established to the up-and-coming. Each artist was assigned a track to respond to, creating a unique experience for the viewer, through using his or her own visual language. The artists involved represent a wide range of disciplines, including film, music, photography, fashion, performance, painting and sculpture. These experiences are combined under one roof to create the ultimate multi-sensory environment. Daydreaming with… is an opportunity for members of both the music and visual arts communities of all ages to engage with one another, and to experience these media in a new and exciting way”.

And yes, that feeling that it all happened on the opening night, for what we encountered was little more than a good looking politely slick selection of graphic design and plush looking urban flavoured artwork on the very slick looking walls of a high-end slick urban art gallery. All looking all spick and span and as slick as those Unkle Graphics and those Mo Wax releases always look. I guess things are looking impressive in the beautifully lit gallery, all vert polite and shining under the spotlights and the reflected neon words alongside the record sleeves, clothing and a bigger painting or two

“James Lavelle will be taking over Lazarides Rathbone with ‘Daydreaming with UNKLE Present… THE ROAD: SOHO’ this will feature exclusive vinyl releases, a pop-up shop and much more. This is Lazarides’ first show of 2017 and will celebrate 25 years of UNKLE and the district of London where the story began; Soho”.

Too slick? I need things to come with a bit more of an edge, a bit more dirt under those finger nails,. a little more danger, does feel like we missed the “multi-sensory creative” aspect of this show, it does look good in there though, it does look plush, it may all be a little “coffee table” but it does look rather good, and yes it is an impressive body of graphic art and those paintings in the front room have something that lifts the whole show, guess we should have found time to get to the opening, there never is time. The gallery wall do look good though, slick slick good good, if it is “street culture” then it isn’t quite what I find on my scuzzy back streets, back to the East End for me then, it was worth making the effort, not sure if it was the social experience they promised, must have all happened on the opening night…

“The show will be one of the most immersive Rathbone has ever seen and will include a new virtual reality installation. James Lavelle plans to reveal the past, present and future joining talented artists, vintage artefacts and a floor dedicated to new UNKLE footage, all of which will be based in Lazarides, Rathbone. This multi-sensory exhibition will get the artist inside you excited with collaborators such as Futura, Doug Foster, Warren Du and Nick Thornton, Norbert Schoerner, Nathan Coley, Dexter Navy, John Isaacs and many more … The show will bring a new social experience to the heart of Soho with talks, screenings, signings and a club night. It will be something that you have never seen before and may never see again, we look forward to you daydreaming with us…”