ORGAN PREVIEW: The Binnie Sisters: The Muddy Clearing – a show or an exhbition or a series of art events or a combination of all of those, opens on Thursday evening, March 5th with a private view and then runs until 11th April. It all happens at Kunstraum, 21 Roscoe Street, London EC1Y 8PT.

We are told that the ever rewarding Binnie Sisters will unearth The Muddy Clearing and will be bringing it to London EC1. “The Muddy clearing was originally set up at an anti-art social space, with real people and real bodies. It is a place where people come together to surprise each other”.

“The Muddy Clearing is brought to you by Christine and Jennifer Binnie, they have been working together throughout their lives, along with Wilma Johnson they founded the Neo-naturists performance group. This exhibition and events programme will represent a selection of their individual practices and their work together, containing unseen works, performances, screenings, as well as an archive of objects, paintings, ceramics and the Binnie Sisters’ shop. Christine and Jennifer will curate the ‘Kuntish Corner’ (spelt with a K in solidarity with Kunstraum), bringing together ritualistic ‘Blessing Bleeding’ chalices, ‘C*nt Chairs’, etchings, paintings. This eclectic installation will include a protest banner from the Anti-Gulf War March, which was constructed by Christine and Susanne Radmann.

Paintings from the Binnie family collection have been used to create an original salon style hang with wall mural. These painted gestures are influenced by Charleston Farmhouse, the home of the Bloomsbury Group in Sussex, located close to their family home. Jennifer paints beyond the canvas onto many domestic surfaces. Her recent work ‘Painted dresser’ (2020) is an decorated dresser which belonged to their Grandmother. The work includes a portrait of Emilly Powell, referencing the Willow Pattern, popular in her day.

Kunstraum’s Speakeasy will host documentation of the play ‘The Knives Beside the Plates [She Gave Her Body But Kept Her Head]’(1983), a punk anthropological reflection on ritual magic, featuring the Binnies Sisters as lead characters and produce by Hermine Demoriane. Taking the format of a reprised version of The Thousand and One Nights, the play sees Sheherazade remaining alive, turning King Sharyar (her would-be murderer) into a harmless eunuch, staging initiation rituals out of “Symbolic Wounds“ by Bruno Bettelheim (1958)”.

The Muddy Clearing Live programme, will punctuate the exhibition, acknowledging a series of countercultural performers and artists from the 1980s to today: 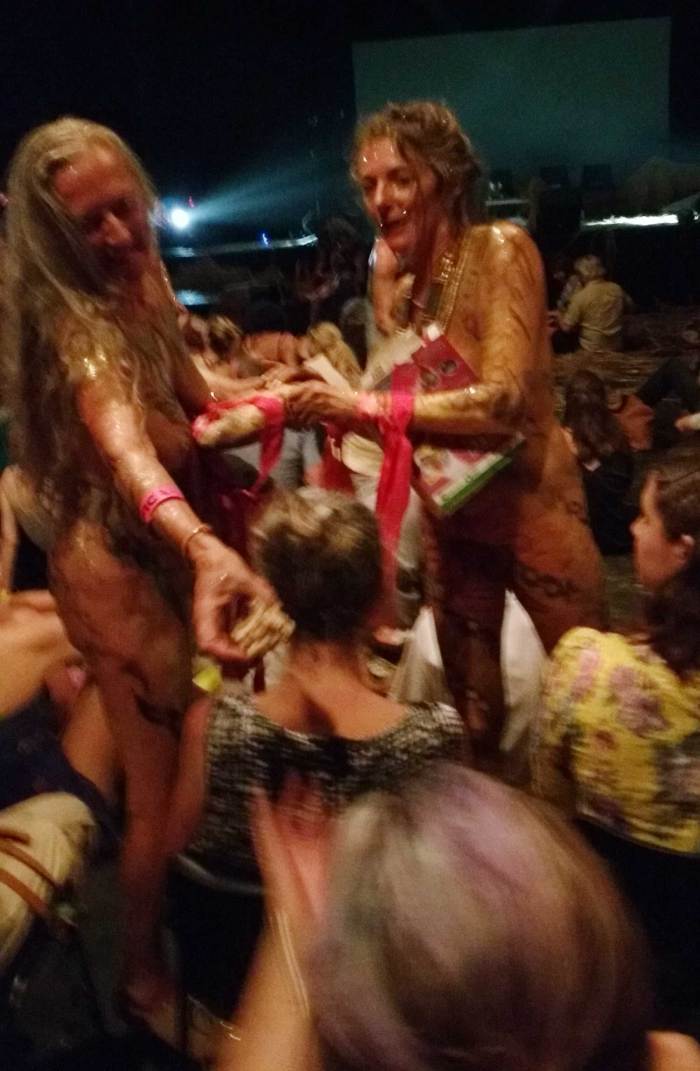 A Night With The Neo Naturists, ICA London, August 2016

The Binnie Sisters’ practice is influenced by their creative parents – father a follower of Rudolph Steiner’s painting out of colour technique and craftswoman mother.

Christine Binnie makes things and makes things happen. Working on the crossover between craft, art and action, she works with clay and with her body to produce performative ceramic events. Her domestic ceramics are often subverted with contradictory words and images. The crossover continues with ceramic works as documents of Neo Naturist activities.

Jennifer Binnie has spent six decades developing a language in paint which she uses for the expression of ideas.

The Neo Naturists is a performance based live art practice started during the early 1980s in London, UK by Christine Binnie, Jennifer Binnie, and Wilma Johnson. The Neo Naturists subtextually, used their own female bodies in the context of the, often gay and exquisitely dandyesque, club scene, such as The Blitz, to play with feminist sexuality issues and sexual politics. As living, naked paintings they performed ancient and modern rituals, everyday actions and rituals on stages lit like kitchens. They juxtaposed ritual action with ‘common sense’ to create messy exuberant happenings. They continue to produce work together, their most recent performance was held on the banks on the Thames on the Winter Solstice, December 2019.

The Muddy Clearing was a performance event originally set up in Eastbourne in 2013.